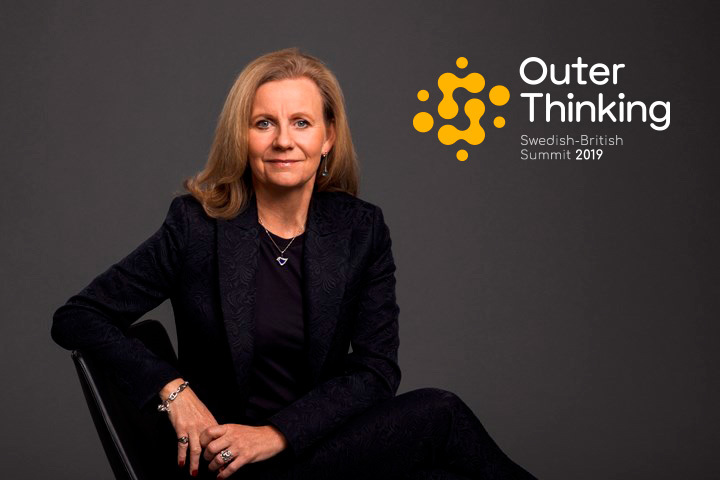 The most important tools for a 21st century leader

“One of the biggest challenges for leaders in the 21st century is the fast-paced world we live in,” says Hélène Barnekow, CEO of SCC member Microsoft Sweden and Master of Ceremonies at the upcoming Swedish-British Summit: Outer Thinking on 5 December.

Hélène Barnekow joined the IT and telecom industry some 25 years ago and has held several leading positions throughout the years, at companies such as Sony Ericsson Mobile Communications and Telia Sweden. Based on her experiences, she recently released the book Re:start, where she elaborates on value-based leadership in a changing world. “One of the greatest challenges of being a leader today is the speed. Technology is of course a driving force, and everything around us goes faster than any of us understand. The way we lead has not kept pace with this development. Instead, we still lean back on old formalities, hierarchies and steering groups, and that is very time consuming,” Hélène explains.

Handle the complexity
How can we then change our leadership to fit this fast-paced world, and not fall behind? “You can never control the complex reality of today in detail. But if others understand the vision, feel involved and understand what they are doing, then you can handle the complexity.” According to Hélène, communication and transparency are important elements of this change: “Without transparency, it becomes impossible for your team to do what they are supposed to. The power does not come from the management team, it is the organisation that must find the incentives from within, but it is impossible if the leaders don’t communicate.”

Reach beyond the formal KPI’s
For Hélène, value-based leadership means that you reach beyond your formal KPI’s: “As soon as you enter a leadership position, whether it is informal or formal, you gain power in some way - power to rule over work, sales or who you hire. Value-based leadership means that you include and set goals for factors such as diversity, inclusion and sustainability. There is a lot of research showing that diverse groups show better results over time and the management needs to understand that these results are visible in the longer term.”

The most important tool in the 21st century
“Many leaders communicate what to do, and then follow up. I focus on what I do myself, to set an example,” Hélène says. “It does not mean that I micro-manage, but I want to do things that show what I mean. This is the easiest and most important tool needed in the 21st century. When you do things yourself, show that you believe in things and take risks, you create a culture. You can never do that with a PowerPoint. It is what you do as a leader that counts and it is perhaps what gives the organisation the most energy.”

An industry in change
Hélène says that the tech industry has come a long way when it comes to diversity and inclusion, but there is still a long way to go. “The tech industry has changed a lot. They are more actively looking for diversity today than they used to and there is another consciousness today. But things are moving too slow. There are 28 % women in IT and telecom in Sweden, which is a decrease from last year. Political decisions regarding education are required, change in how leaders act and how we recruit. If we are to be self-critical, we have not taken this seriously. Then it would not have looked this way.”

Meet Hélène at the Swedish-British Summit: Outer Thinking, on 5 December

The Swedish Chamber of Commerce for the UK is currently looking to welcome four new interns to join its ambitious team in the autumn of 2020. Read more about the internship and how to apply: https://t.co/kqHnpvAKlC Application deadline is 2 March 2020. #internship #SCC #UK
On 22 January, the SCC welcomed guests to an exclusive forecast of the World in 2020 featuring Daniel Franklin, Executive and Diplomatic Editor of @TheEconomist. This event was kindly hosted by Norton Rose Fulbright @NLawGlobal. See more photos here: https://t.co/gMkQBixoCz
Welcome to the Nordic M&A Forum on 6 February at Linklaters. The fireside chat “Impact investing in the Nordics” will highlight investing into organisations that generate beneficial social or environmental impact alongside financial revenue. Learn more: https://t.co/bjQNkSG8AH