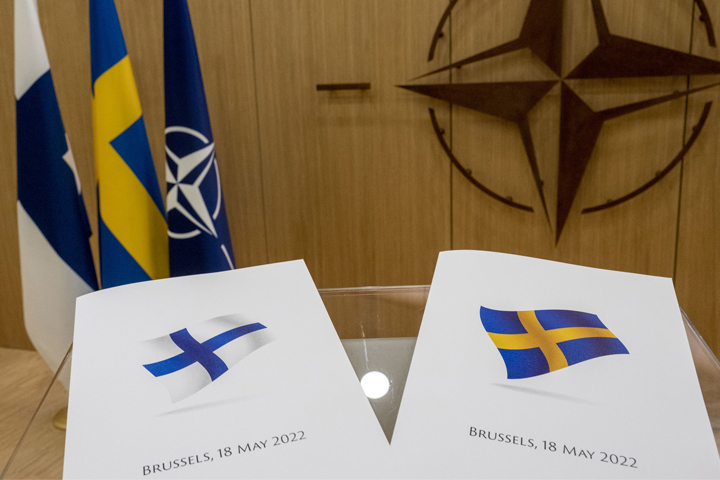 How did Sweden and Finland go from a clear ‘no’ to saying ‘yes’ to NATO?

In the past both Sweden and Finland have clearly stated that there has been no majority among the population nor in Parliament for joining NATO. However, all changed in just under three months following the invasion of Ukraine and Russia’s heightened rhetoric and threats against the two countries. Since then, the two Nordic allies have now shown determination and coordination, in both tonality and action.

Join us for a webinar discussing Sweden and Finland’s journey to NATO, and “what now”?

Potentially more speakers to be confirmed. The seminar will be moderated by Katri Makkonen, journalist and communications professional who previously worked as director of communications for Finland’s president Sauli Niinistö.

This is a Swedish Chambers International webinar hosted by the Swedish Chamber of Commerce for the United Kingdom, and is a partnership with Miltton Public Affairs.

The event is free of charge to all. Please register for the webinar by using the booking form.

About the Swedish Chambers International (SCI)

The Swedish Chambers International (SCI) is the umbrella organisation for Swedish Chambers of Commerce globally. Today, it represents Swedish Chambers across a large number of key trading locations with strong Swedish business ties. The SCI works with public bodies and other organisations and stakeholders - with the joint goal to expand the bilateral trade and economic exchange, and see it as essential for prosperity and development.

Back to Events
Keep in touch on social
SCC chief executive Peter Sandberg speaks about #Brexit in @sverigesradio , about UK, the current state and what to expect next. Tune in: https://t.co/DNmYnUIINI
Yesterday, we welcomed seven new members to our Board of Directors at our 115th Annual General Meeting. Learn more: https://t.co/2YFBlo10Px
The Swedish-British relationship is one of friendship and trade and has gone from strength to strength over the last few decades, SCC Chief Executive Peter Sandberg writes in today's City AM https://t.co/3BY3hfmBdb
Join our mailing list