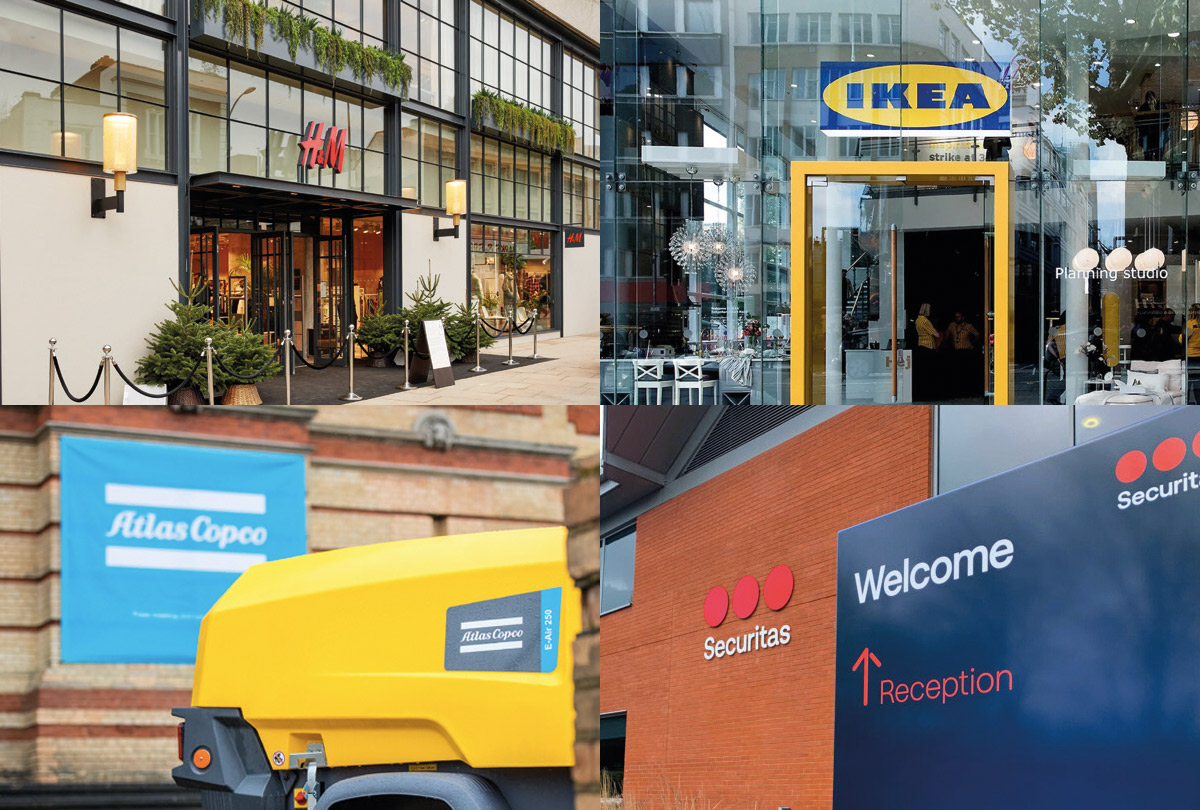 Swedish businesses have been present in the United Kingdom for centuries and contribute to the UK economy and society through investments, innovation, people culture and not least through the thousands of job opportunities created. In fact – the ten largest Swedish employers alone, employ more than 55,000 people across sectors and industries in the UK. In a new series of features, we will be looking at different aspects of the Swedish footprint in the UK, starting with ranking the Swedish employers that create the most job opportunities in the UK.

No. 1: H&M
Employing over 12,100 and with close to 300 stores across the UK, retail giant and SCC patron H&M takes the number one spot as the largest Swedish employer in the UK.

With a circular approach and a range of brands such as H&M Home, & Other Stories, COS and Arket, H&M Group has in recent years diversified its range to “make great design available to everyone in a sustainable way”, now also including experiences such as modern, healthy food.

UK head office: London
Close to 300 stores across the UK.


No. 2: IKEA
With nearly 10,800 employees, SCC patron and self-assembly innovator IKEA, is the second largest Swedish employer in the UK. The UK presence includes 21 stores, two collection points, one planning studio and a wind farm in Dummuies, Scotland.

After opening its Planning Studio on Tottenham Court Road in London, IKEA continues its inner-city strategy by opening a store in Hammersmith later in 2021, as a way to respond to people’s evolving shopping habits.


No. 3: Securitas
With more than 8,100 employees, SCC patron Securitas is one of the largest security companies in the UK and ranks as the third largest Swedish employer in the UK.

Securitas UK has been officially recognised as a Top Employer 2021 by the Top Employers Institute for its commitment to delivering exceptional people management and HR strategies. The company has received the certification for the third year running.


No. 4: AstraZeneca
With its Swedish-British ownership, and an equal spread of employees in both Sweden and in the UK, the company is a true symbol of a successful Swedish-British partnership.

Since early 2020 when the true scale of the ongoing pandemic became clear, AstraZeneca has committed to help defeat COVID-19 by harnessing and sharing its scientific knowledge and expertise to advance and accelerate the development of potential medicines to prevent or treat the virus. The AstraZeneca vaccine was first used in December in the UK.


No. 5: Skanska
SCC patron Skanska is one of the UK’s leading construction contractors, employing approximately 3,300 people in the country, and in extension, Skanska projects employs more than 10,000 in total.

With its motto ‘Naturally Skanska’, the company celebrates people’s differences, knowing that diversity opens a rich potential for new ways of thinking, and to building successful and winning teams. Read more about Skanska on pages 37-38.


No. 6: Nobia
Europe’s leading kitchen specialist and SCC member Nobia, employs approximately 2,800 people in the UK. The company has 210 stores across the country, as well as five production units in Darlington, Dewsbury, Halifax, Morley and Grays.

In the UK, Nobia is present with the brands Magnet, Gower, Rixonway Kitchens, Commodore Kitchens and CIE.


No. 7: Stena
Stena has been present in the UK since the mid-60’s. The group has expanded its business activities in the UK substantially throughout the years, especially in the areas of Ferry Operation, Offshore Drilling and Shipping, and employs approximately 2,500 people across its business areas.


No. 7: Handelsbanken
SCC patron Handelsbanken employs approximately 2,500 people across over 190 branches in the UK.

The bank calls itself a local relationship bank and with its decentralised model, each branch operates as a local business, empowering them to make key banking decisions. For the twelfth year in a row, an independent survey of British bank customers’ satisfaction has found Handelsbanken to have the most satisfied customers in Britain, both for individual and corporate banking.

UK head office: London
Over 190 local branches across the UK.


No. 7: Ericsson
SCC patron Ericsson has been connecting the UK for more than 120 years. Headquartered in Reading and with seven offices in Chiswick, Coventry, Ealing, Glasgow, Leeds, Salford and Southampton, the company employs approximately 2,500 people in the UK.

Managing mobile networks for over 90 million UK subscribers and creating technology solutions for customers and industry partners, Ericsson is today leading the development in 5G across the UK.

Back to News and Insights
Keep in touch on social
Are you looking to #expand your business abroad? At our second session of Scotland-Sweden Business Exchange, you will be meeting experts giving in-depth insights into the opportunities for British and Scottish businesses. Learn more and sign up here: https://t.co/8aMSuuM52A
Young professionals - join us next Wednesday on 25 August for the first Connecting Drink of the autumn. A great opportunity to meet other young professionals, network after a year of working from home, and enjoy a complimentary drink. Sign up here: https://t.co/AFxchd0XEQ
What role does electrification of transportation and alternative fuels play in our journey towards a green future? Sign up to Impact 2021 to hear a fireside chat about this topic with Tanya Neech, Scania and James Padden, Department for Transport: https://t.co/57IzeTN9MP
Join our mailing list