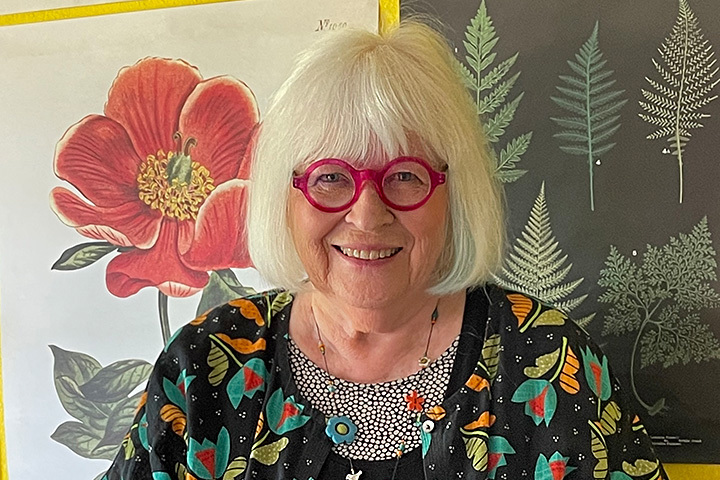 She is the name, face and founder of one of the most successful Swedish clothing brands in the world. But even with a turnover of nearly one billion SEK and 340 employees, Gudrun Sjödén still gets involved in the details of the brand and products. Afterall, that is how it all started – and it is safe to say that her strategy has worked out well, but it wasn’t without its ups and downs.

With her signature bright colours and eye-catching patterns, Gudrun Sjödén is not a person who is looking to blend in. The same goes for the fashion brand that carries her name. But there is more to Gudrun Sjödén than timeless designs and durable fabrics – she wants her clothes to be as pleasing to the planet as they are to the eye. “I want the concept of sustainability to run through everything I do – by using fabrics and designs that will last for many years without feeling out of fashion,“ she tells the Link.

Born with business in her blood
Coming from a family of farmers, she grew up seeing the hardships of entrepreneurship up-close. She learned early on how the financial situation can be as unpredictable and shifting as the seasons, but did not let it stop her from following a similar path. However, she swapped life on the countryside for a more vibrant one in Stockholm, where she began her studies at Konstfack in 1958. Gudrun remembers these years as crucial for her understanding of the clothing industry. “During my time at Konstfack I learned to shift focus from the art of craftmanship to thinking in more industrial terms.” This was only the first of many drastic changes that were about to come into Gudrun’s life, and to society as a whole.

The new era
The 1950s turned into the 1960s, and with the new decade came a new mindset, affecting everything from politics to fashion. The ‘free 60s’ provided Gudrun and her colleagues with an increased artistic freedom, while globalisation opened new doors when it came to production. “Long and flowing skirts were swapped for miniskirts with geometrical patterns. The revolution created many new opportunities, both design wise, but also production wise, as large-scale production in more affordable sites, such as Hongkong and Portugal became accessible to us.“

The following years, Gudrun made her way as a freelancer, working for companies in Sweden, Finland and Hongkong. This helped her build an international network, but the terms of the freelancing life did not lead the type of sales that she had in mind. “The European chains that I was working with preferred to buy individual pieces instead of complete collections. And even if this meant that many of my designs were actually produced, I felt disappointed, and decided that I wanted to operate on my own terms instead.”

The birth of the brand
As a result, Gudrun and her husband Björn founded the brand Gudrun Sjödén, visualising a brand with coordinated design clothing made of natural materials and fabrics, a concept which was far from standard at the time. “These materials were not easy to find on the market back then. Most contemporary clothing was produced using materials such as synthetic fibres.”

Nonetheless, Gudrun was determined to stick to her philosophy and created her first own collection – a collection of sports- and outdoor clothing. The couple then began a promotion tour and managed to sell the collection to different stores in northern Europe, yet still found themselves struggling financially. “We participated in fairs and managed to sell the clothing line to quite a few stores. But it was difficult to finance the business, as production and sales had to be planned months in advance, but were both very hard to predict.“

Gudrun was comfortable when it came to design and production, but the business part was an area she did not yet master. “Money was the biggest issue. We were told that it would take about two years for a business to break even, but I would say that it takes ten years before you will make even the slightest profit.“

Opening the first store
Gudrun and Björn opened the first Gudrun Sjödén store in central Stockholm 1976, and Gudrun remembers it as an important milestone in the history of the brand. “It felt like sign of success to have our own store and not being so dependent on department stores buying my collections.“

From day one, the couple made sure that their main focus was on customer satisfaction, realising that the most important factor to survive as an independent brand would be to create and maintain good relationships with their clients. They started producing their own promotional material, including a catalogue, where Björn handled the photoshoots while Gudrun was in charge of the layout, items and the production of the clothes.

In the beginning of the 1980s, Gudrun started accepting orders from the rest of the Nordic countries as well as Germany and the USA. As it was before the time of computers and automated systems, Gudrun and Björn were handling everything from registration to shipping by themselves. “We were writing down all the client information manually, packing and sending the orders ourselves. Björn and I were the biggest clients at our local post office – and very proud of it!”

Entering the international scene
The brand continued to expand. With the help of Gudrun’s sister, who was living in Germany at the time, they established the brand on the German market, while operating the American branch remotely. Soon after, Gudrun Sjödén opened two stores, hired several employees and opened a main office in the outskirts of San Francisco.

The brand’s relationship with the American market was sweet but relatively short. Seven years later, Gudrun was forced to close her US business, as a result of the political instability unsettling the country at the time. “The war in the Middle East had a huge impact on the consumption patterns. When experiencing political insecurity, people are not in the mood to shop. We were sad to close, but had no other choice than to accept it.” However, mail orders – the lifeline of the brand – kept coming even during the less fruitful times. Gudrun and Björn decided to put even more focus on remote customers and in 1997 they took the next pioneering step by opening up their first web shop.

The shift
Two decades later, Gudrun Sjödén is continuing to expand globally and to enter new markets. China was supposed to be the next country to conquer, but due to the pandemic, Gudrun had to put that plan on hold. However, her designs continue to draw attention all over the globe and Gudrun is benefitting from the new technological advances in multiple ways. “We continue to engage followers on our social platforms, both in Hongkong and other Asian countries. In Australia, where we continue to have good sales figures, we see the sales happening organically as well – through customer generated sales-groups on Facebook. It is amazing to see the customers creating their own market on their own terms.”

When asked about the future, Gudrun says she is optimistic. With the changes enforced by the pandemic, she managed to exceed her goal of seeing 90% of the sales taking place online, and with her green philosophy going hand in hand with the trends of today, she can expect the success to continue. Next milestone is reaching a one billion SEK turnover – a target that is not too far away. “This is really exciting news for me and the board. I am convinced that our customers will keep coming back to us because they know they can trust us. They will stay true to us the same way that we have stayed true, and consistent, to our philosophy.“

This is, according to Gudrun, the key to creating an enduring and long-lasting client network. And with her 45 years in the business and soon to be billion SEK fashion empire, it is clear that Gudrun knows what she is talking about. “In the end, the brands that stay true to their philosophy are the ones that can navigate through storms and survive hardships. Our values are carried by both our customers and employees – this is our most important legacy.”

Back to News and Insights
Keep in touch on social
Young professionals, kick off the Christmas celebrations by joining us for the Annual Christmas Dinner on 10 December. Right now, we are happy to offer great benefits from signing up to join us this evening. Read more and sign up here: https://t.co/sAfJPCHs3E
Are you ready to kick-start your international career? The SCC is proud to announce a record five #scholarships available for a new cohort of #young #talents in 2022/23. Learn more about qualifications and how to apply: https://t.co/gIkJm5JEVh
Sweden removes UK travel ban for fully vaccinated, the Government announces. Read more: https://t.co/EZhv9Jk9TP #UK #Sweden #travelban #COVID19
Join our mailing list