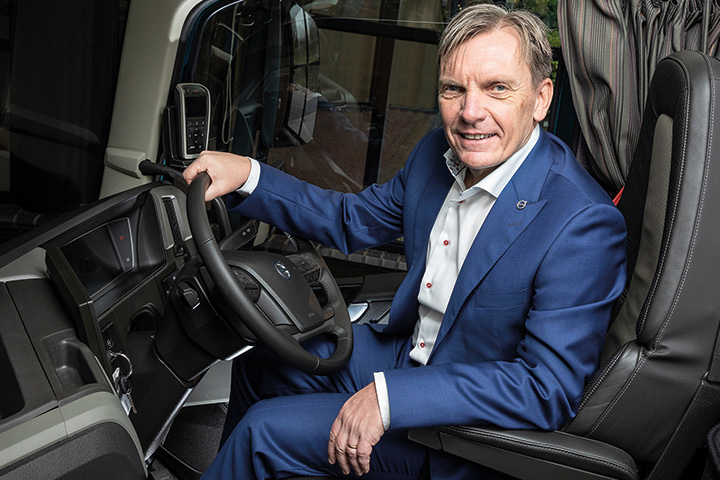 Growing up in Belgium, somewhat of a second home to Volvo Group, the company has been present in most of Christian Coolsaet’s life. “I always looked up to the company. I was really inspired by them, and I remember thinking the people working there were super-humans. Since then, it became an aspiration to be part of that, and suddenly, the opportunity came.” 25 years ago, Christian jump-started his career at Volvo Group as he got the opportunity to join Volvo Bus International in Brussels – and so the journey began.

In 2002, the first international opportunity presented itself in the form of a Managing Director role in Ukraine. “My wife and I were only in our mid-30s, and we thought we’d do this for three years, learn Russian, and save up a bit to pay the mortgage on the house we had in Brussels – but then we ended up never coming back. I was very young and inexperienced, but Volvo was willing to take that risk and allowed me to make my mistakes with hope I would learn from them – which I find so remarkable.”

Career defining moments
Since things started to kick off in Ukraine, to be constantly on the move has been the normality for Christian. From 2002 up until now, he has worked in several markets including Eastern Europe, Germany, South Africa, and now in the UK. “One career defining moment was when the Executive Vice President Roger Alm himself became my boss in Eastern Europe. We did five years together in Bucharest, which was a fantastic journey. In those days, Romania was the biggest Eastern European market with a very different culture than the UK.”

Even though the years in Romania were full of positive experiences, they also came with great challenges, which ended up bringing Christian and Roger Alm closer together. “During the years in Romania, we had to handle the biggest crisis we’ve ever faced – the finance crash in 2009. In a situation like that, there was no guide, you just had learn on the fly. We really did come out stronger from that, and the experience created a bond between the two of us. We still work very closely together to this day.”

In the following four years, Christian was part of two expansions. First to Germany, where Christian served three years as Sales Director for the German speaking countries, including Germany, Austria, and Switzerland. Thereafter, he took a quick detour to South Africa for 15 months to set up the operations, and then came back to Germany as Managing Director. “I find Germany to be a fantastic country to live in, especially the southern parts. If you ask my children, they will refer to Germany as their home territory.”

“I have everything to thank my family for, they have sacrificed so much more than me.”

When it comes to Christian’s family, he is very careful to emphasise that without them, this wouldn’t have been possible; “I have everything to thank my family for, they have sacrificed so much more than me. Whenever we moved to a new country, I would still have the Volvo-bubble – they wouldn’t. That is why I think they are even braver than I am, and I couldn’t have done this journey without the full support of them.”

We’re too busy focusing on differences
Even though culture can differ quite a lot from market to market, Christian emphasises that we are too busy focusing on differences; “I have learned that there are way more things making us similar, so instead of focusing on differences, I’m trying to find more common ground. At the end of the day, we are a global group, and if we can find what makes us similar, we can learn from each other and apply it to our own markets. No matter what culture, people are seeking prosperity at work, with their families, and partners. We just want to build a secure future, it doesn’t matter which nationality you have, which religion you believe in, or what language you speak – that is what we all aspire and work for. Instead of focusing on how to do things differently, we can focus on how to make them more efficiently.”

When asked how you can best adapt to a new market, Christian is quick to answer; “Learn the language,” he says and continues, “people like transparency, they want to know you are genuine, without any hidden agendas. If you truly want to reach people, you need to know their language. I did every effort I could to learn the language of each market I have worked in.”

Becoming Managing Director in the UK & Ireland
The UK is one of the first markets the company expanded to after Scandinavia and is viewed as important for Volvo Group, employing about 1,000 people. Christian views it as a great honour to have been asked to become Managing Director there in 2020; “I was flattered, it’s an extreme privilege to be asked. I am really humbled by how the company puts so much trust in me as a person.

Christian joined as Managing Director in the UK and Ireland in the beginning of July 2020, just a couple of months into the pandemic. This combined with the insecurities caused by Brexit, all of a sudden, the flashbacks of 2009 started to come back, but had also prepared him well; “Again, it was all about handling the agenda, and it was clear we needed to prepare for whatever scenario might occur. The specifics of the agenda, along with the influence of my boss, was what really appealed to me and led me to the UK.”

The easiest – and most complex question
When asked about his vision for Volvo Trucks UK and Ireland in the long term, he says it’s the easiest, yet the most complex question; “The entire industry is standing on a crossroad, and the fact that the road we’ve been on for decades is going to end is crystal clear. We have an obligation towards the planet and towards future generations to be sustainable. It is my task to get sustainability into the heads and hearts of the people in this organisation.”

“The main focus for us is to break the stereotypes and think in new ways to ensure a sustainable future. We signed a charter at COP26 last year in Glasgow to be amongst the early movers worldwide. So far, we are succeeding. We already have electric heavy haulage trucks on the UK roads and are moving towards being the first manufacturer in the world with a full line-up of battery electric vehicles. In the foreseeable future, we will also come out with a hydrogen solution.”

“It is my task to get sustainability into the head and hearts of the people in this organisation.”

It starts with the man in the mirror
Christian emphasises that even though it might be comfortable to rely on old solutions, it’s time to move on; “Let’s not be nostalgic about the past – it’s gone – let’s try to prepare. It’s up to the brave on this planet to make that change.” He continues; “Michael Jackson used it in a different context, but it really does start with the man in the mirror.”

“When people feel secure and like they are free to express themselves, so much creativity comes out.”

People are “insanely talented”
To get things moving and make the team think in new, sustainable ways, Christian believes the key is to express trust, and to stay away from being too polite; “I believe people are good the way they are, there is no need for all that ‘fluffy’ language for the sake of politeness, “he continues, “when people feel secure and like they are free to express their opinion, so much energy, brainpower, and creativity comes out. If there is one thing I’ve learnt after all these years, is that people are insanely talented – and it’s my job to create the atmosphere and provide the tools to make that talent blossom.”

The first Volvo truck was born in 1928. Since then, it’s grown to become the largest producer of heavy trucks in Europe. The company was brought to the UK by the duo Jim Kelvie and Jim Keyden in 1967 under the name Alisa Trucks, celebrating 55 years this year.