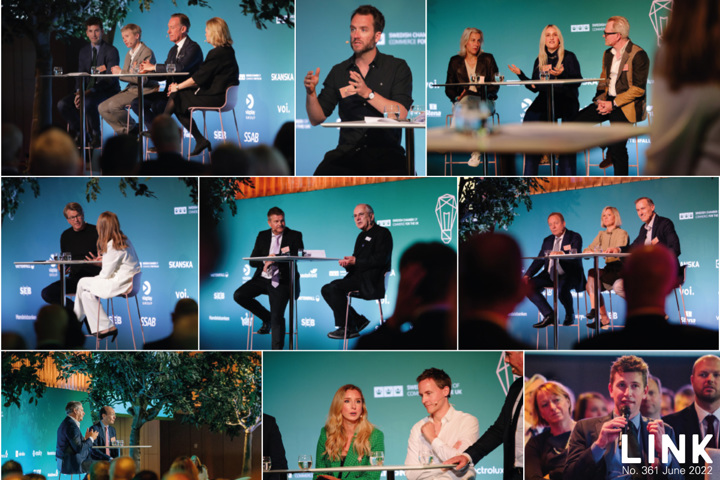 We need more collaboration, speed and fundamentally change our business models to reach our net zero targets by 2050. These were some of the key take-aways as some of the most senior business leaders and game changers in their industries gathered at the SCC’s sustainability summit Impact, to discuss the greatest challenge of our lifetime. In the presence of Their Majesties the King and Queen of Sweden and joined by more than 300 delegates, the 30+ speakers raised the crucial questions needed to reduce our environmental footprint.

Swedish Minister for Education Anna Ekström kicked off the summit by emphasising the significance of the relationship between Sweden and the UK. The Minister called for an ambitious agenda with Sweden and the UK in the forefront of the green and digital transition, and that this transition in fact can be an engine for growth. “Carefully deliberated and executed, it can strengthen the economy, ensure competitiveness, and provide new business opportunities and new green jobs.”

Growth is key to invest in the green transition

Johan Lundgren, CEO of EasyJet, said that growth is key and that airlines need to remain profitable and continue attract passengers, if they are to invest in a sustainable future. He stressed that so called “flight shaming” and suppressing demand is not the solution. Anko van der Werff, CEO of SAS, said that while we are waiting for zero-emission aircrafts, sustainable aviation fuel needs to remain a short-term focus for the industry.

Being part of the solution

“Climate change is here, it is for real. The good news is that we can be a part of the solution,” said Skanska CEO Anders Danielsson in a fireside chat with Sir Peter Hendy CBE, Chair of Network Rail. They agreed that the key to success is collaboration across the whole
supply chain, and that public procurement is key as governments and state-owned enterprises are the largest buyers of goods and services – something that was echoed by speakers throughout the day.

Business in the driving seat

Jan-Olof Jacke, Director General of the Confederation of Swedish Enterprise, believes that business can contribute through driving the pace of change. “I think business is definitely in the driving seat. But we need to remove obstacles, create the right conditions for this to actually happen,” he said. Allison Kirkby, President and CEO of Telia Company, agreed but said that we are not moving fast enough to find the new solutions that will get us beyond net zero. She calls for both transparency and accountability: “We have to set out the goals that are measured in the same way as the financial goals on a quarterly and annual basis so that we’re held to account on it.”

Fiona Harvey, Environment Correspondent at The Guardian was on the same page and said that we need to understand that this isn’t just a matter of individual responsibility. “During the lockdowns, the UK’s emissions fell by about a third. But that was when we were all in our houses not doing anything the whole time. And two thirds of our emissions were still intact. That shows us that we need systemic change, and that individuals can’t change this by themselves.”

Apart from acting fast enough, scaling up successful efforts is of utmost importance to make real impact. Martin Lindqvist, President & CEO of SSAB and Darren Wilson, CEO of LKAB Minerals, discussed the possibilities and challenges of their joint quest shared with Vattenfall, to mass-produce fossil-free steel. Darren said that while it all is technically possible, it will all depend on the political and societal will to what it means in terms of the huge changes in infrastructure. “People don’t just realise the sheer scale of the change in terms of electricity generation, production of green hydrogen and the complete transformation of our part of the value chain.”

The pilot is today producing 100 tonnes of fossil-free steel and will move to 1.3 million tonnes in 2026, with a target of more than 5 million tonnes in 2030. “The steel industry globally emits 79% of all the carbon dioxide. We can’t really afford not to do this,” said Martin.

Massive data centres hosting essentially all digital companies are a sometimes invisible source of carbon dioxide emissions. Games giant King, serving some 250 million monthly players of Candy Crush Saga and other mobile games, is taking action to minimise the impact of its games, by making them faster to load and less energy consuming. The vast part of the company’s CO2 emissions, 92%, come from the value chain of social media platforms and app stores used to market and download the games. “Behind the scenes, there’s a tremendous amount of computation power and energy to call those servers,” said Todd Green General Manager of Candy Crush Saga. “The good news is that as we move into the next generation of computation and data storage known as cloud computing, giving a lot more flexibility in applying technical solutions like machine learning to increase the efficiency of cooling, and even the energy input is starting to change now.”

Circularity is not only about recycling, but also reusing and repurposing to eliminate waste and pollution and regenerate nature. This was the consensus of a panel discussing the transformation of our take-make-waste system. “Being able to repair rather than replacing a product is actually a real driver for consumer loyalty. You have to see it as a journey across a lifetime over consumer experience, rather than the point of purchase, said Sarah Schaefer, Vice President Sustainability, Electrolux in a discussion with Robert Petersson, CEO at Kinnarps, and Vianney Valès, CEO at Wastefront.

Fashion retailers, the likes of COS and GANT, face similar challenges as they are transforming their whole value chains and building circular models around responsible products with an extended lifespan, where products are reused and repurposed before they are finally recycled. According to Helen Dickinson, CEO of the British Retail Consortium, the UK retail industry produces 200 million tonnes of carbon equivalent. Francesca Lilley, Head of Sustainability and Brand Strategy at COS said that it is the retailers’ responsibility to help consumers make informed decisions by being transparent with the way they are running the business.

Patrik Söderström, CEO of GANT, said that while consumers today are enlightened, it is not an easy task to make conscious purchase decisions. “We see consumers turning their backs on companies not living up to expectations, but it is difficult for consumers to understand the difference between kind of the same product – what is sustainable, and what is not.”

“We really need collaboration across industry and different competencies to be able to facilitate that more circular way of running business,” said Francesca.

The discussions segwayed into mobility as Voi, Polestar, Einride and Transport for London attacked the issue of sustainable modes of transport. Today, 55% of the urban population lives in cities, which is only expected to grow in density causing mobility and transportation issues, not to mention the lack of space. “60% of all the trips in cities are below 10 kilometres and they are mainly taken by cars and taxis,” said Christina Moe Gjerde, General Manager Nordics at e-scooter company Voi Technology. “Take my ride to get here this morning as an example. I was stuck in traffic for 29 minutes in a taxi, which could have taken me six minutes on a bike.”

“We need different forms of transportation. What they need to have in common is that they all contribute to the zero emission
targets,” said Nils Mösko, Chief Strategy Officer at electric car brand Polestar. Christina agreed: “We don’t envision a future where we don’t have cars, we just need to replace the trips that we can replace with more efficient modes of transport.”

Cost of the green transition

The cost of the green transition falls somewhere between $5-7 trillion a year until 2050, said Chuka Umunna, Managing Director and Head of EMEA ESG at JP Morgan, as part of a discussion on green finance. “But the problem is, we are nowhere near hitting that figure at the moment.”

With its over 150 branches across the UK, Handelsbanken has built a decentralised organisation with a large amount of autonomy and accountability for its branch teams. “We think that this has real applicability in the net zero transition working with our customers,” said Richard Winder, Head of Sustainability at Handelsbanken UK. “We have really strong relationships built up over many years by teams in their own hometowns, so they care about acting responsibly. They have the decision making authority and accountability to take that forward.”

Swedish investment firm EQT is a purpose driven investment organisation, with the purpose to future-proof companies and make a positive impact. Sophie Walker, the firm’s Head of Sustainability for Private Capital, said that one of the joys of working in private equity is to get closely involved with the individual businesses and how they are transforming the markets. “An example is the first investment in EQT’s impact driven long-hold strategy where we are effectively scaling a biocide-free solution to pest control, which could be market-transformational.”

Chuka stressed that financing the transition can impossibly be the sole responsibility of the financial markets and called for cooperation between the private and public sectors. “The public sector has got a really big role to play here too. It can’t be left to financial and capital markets to sort it all out.”