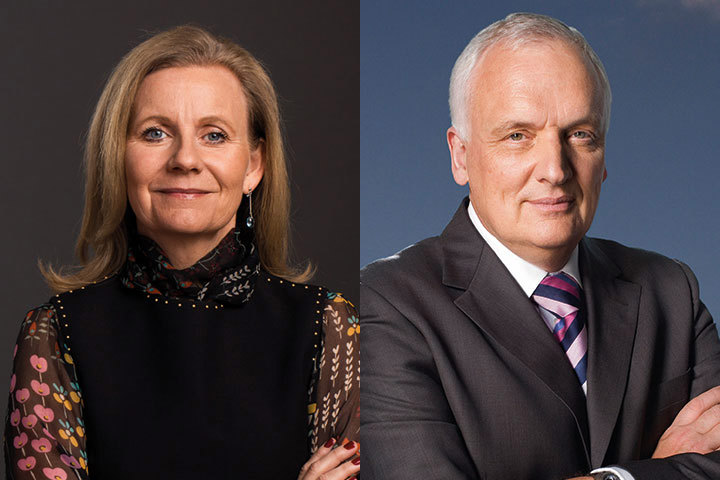 21st century leadership: Keeping up with the speed of change

In a time where the surrounding world is changing at an increasing speed, how can today’s leaders keep up with the growing disruption? Hélène Barnekow, CEO of Microsoft Sweden, and Nik Gowing, Director and Founder of Thinking the Unthinkable say humility, flexibility, and courage are key ingredients for success in overcoming the new uncertainties. The Link met up with them both for a conversation on how to excel as a leader in the 21st century.

Everything is changing
Hélène: Absolutely everything is changing right now, and I would say the main driver for that is the technological advancements made in recent years. Since technology has moved into an exponential growth, it is important that we as humans use our intelligence, experience, and behaviour to figure out how to package that. We need to make sure these changes move in the right direction and become useful for us and for the challenges we are facing today.

Nik: I don’t think we should be surprised that things are changing. But I do think people are shocked about the scale of the changes that has been forced upon us in recent years. COVID has further accentuated everything. We have had 18 years of change in 18 months. Now we have the pressing issue of climate change, which scientists say is an existential emergency. I don’t think most people have factored that into their lifestyle yet – the way they live, what their ambitions are, and how they’re going to cope with everything.

We are going through a pinball machine
Hélène: I think we are forced into changing along with the development of, for example, technology. We can’t ignore it and we need to embrace it. You could view the pandemic as a subset to that driver, because like Nik said, we have been forced to change our thinking and use of technology much faster than we otherwise would have – and this is adding new pressure on leaders to keep up with and adapt to in their leadership.

Nik: I like to view what we are going through as a pinball machine, where one destabilisation leads to another, which leads to another, and so on. The pinball is going back and forth at an increasing speed in different directions until it reaches the tipping point. One reaction is leading to another counter-reaction. Some have done very well out of it. But others are struggling because they are stuck in a way of thinking that is really a legacy of times which are not passing easily, but very rapidly.

Being maverick is actually being visionary
Nik: I think people are struggling to understand how to adapt to these changes. The conformity we agreed to when taking a job because we met the criteria is now being tested. The qualifications which got you the job are often no longer appropriate. They can now often disqualify you, because today you need more flexibility. You need humility, agility, and the ability to adapt. It’s about understanding that we need to think in new ways. Normally we would class it as thinking in a maverick way. But being maverick is actually being visionary. The leaders who are smart will realise that this is not a threat to their existence, it’s a challenge. It’s not about being pessimistic or optimistic about how you adapt, it’s about being realistic.

Hélène: To build on that, I think it has never been more difficult to be a leader than it is today. It is not for the faint of heart to be a leader in today’s climate. There are many demands pressing from different directions, and every day you manage contractionary needs. You know, we have this model of delivering every quarter and everything is being evaluated according to that, but the challenges that we are facing today often has nothing to do with the present quarter. So, I think there is a big contradiction between what we do and measure in short term versus what you actually need to do for the long term. I think more companies need to realise this and integrate into their culture. We need to think about how we coach future leaders to fit these roles, because it is no longer only about delivering on fixed KPI’s for the next quarters to come – it is about being extremely flexible and it takes a whole lot of humility.

Nik: I think the key to achieve this is to make sure that you have a good board, with a really good chairperson. A good chair is someone who will be appointing those who are prepared to question and challenge. I would fully agree with Hélène on humility. It doesn’t come easy to a lot of leaders, to admit that they don’t know everything. It is all about mindset and behaviour, and it does require change and mentoring, even in the smartest, best qualified cabinet. No one is immune from this. And those who think they will somehow get away with it are in my view making a very big mistake.

Political leadership is going to be tested by the climate issues
Nik: A very interesting thing I heard a very senior public servant say in a discussion similar to this one is that political leadership is going to be tested to its limits and beyond by the climate issues. He said: what we need now is a breed of politicians who, in order to do what is necessary for the climate emergency, at the speed that is necessary, are prepared to commit political suicide in order to do it. Because the kind of things that are needed will not be publicly popular.

Hélène: I think the same goes for company leaders. What we need to do in order to change and adapt to today’s challenges may not give you an extended term as CEO or Chairman or similar, but to actually make a difference, you will need to have the courage to do so.
Nik: I agree. It requires a deep understanding for stakeholders and shareholders who expect return in the quarterly numbers. It requires a board that is prepared to say, “let’s change, and let’s wait for the numbers to change, but let us not be worried if the profit figures and the profit and loss statement isn’t as good for the next few months or next year or two.”

The right mindset is crucial
Hélène: The right mindset is crucial. I think curiosity is the most important thing – whatever you do, do not get stuck thinking you know everything. I think the wording “you don’t know what you don’t know” has never been more appropriate than now. There is currently an extreme need of having real diversity of thought in your manging room, and you should really be more afraid of the questions that are not being asked in there, than the one’s being asked. Many people try to limit the questions that can be asked in these meetings so that they can manage and tell the team that they did really well – which is the biggest mistake you can make. This new type of mindset is not what we were taught in the management and leadership courses, but it is the mindset I really think we need to capture.

Nik: I would pick up on that business school argument. Paul Polman [ex CEO of Unilever] is CEO of Imagine and Chairman of Saïd Business School which has been running a project around the future of corporation together with the British Academy. One of the things coming from their most recent report is that business schools are not the places to - in any way now - teach businesspeople how to run a business. Most lecturers and professors teaching these classes have made their careers through an old way of thinking. I was talking with the chair of a very large company a couple of days ago, and he said, “I want
people to think in a wacky way”. I would say that we don’t want them to be regarded as wacky, they need to be regarded as visionary.

I think there is a danger in this new environment of being overwhelmed, of waking up, almost panicked by this. And therefore, you’ve got to have a great team around you, of people who are feeding stuff to you. You’ve got to have frankness. And you’ve got to have something which doesn’t come easily to a lot of leaders: a willingness to be told you’re wrong. As I said previously, the conformity which got you the job in the first place isn’t qualifying you for the way you need to run your job today. That conformity said, “I must lead”. But the new way of thinking can also be: “I am here to be a guide.”

Swedish-British Summit: Outer Thinking
Hélène and Nik will be moderating the Swedish-British Summit: Outer Thinking on 2 December. With 20+ speakers from both business and the political sphere, we will be discussing the key trends facing any business today – from artificial intelligence to sustainability and continuous learning – and looking forward to the business of tomorrow.

Back to News and Insights
Keep in touch on social
"The pandemic might have been beneficial for the government, as it blurs the borders between the effects of #COVID and the ones of #Brexit” says Peter Sandberg, SCC Chief Executive, to @dagensindustri: https://t.co/CDIbqyazjF
Young professionals, kick off the Christmas celebrations by joining us for the Annual Christmas Dinner on 10 December. Right now, we are happy to offer great benefits from signing up to join us this evening. Read more and sign up here: https://t.co/sAfJPCHs3E
Are you ready to kick-start your international career? The SCC is proud to announce a record five #scholarships available for a new cohort of #young #talents in 2022/23. Learn more about qualifications and how to apply: https://t.co/gIkJm5JEVh
Join our mailing list