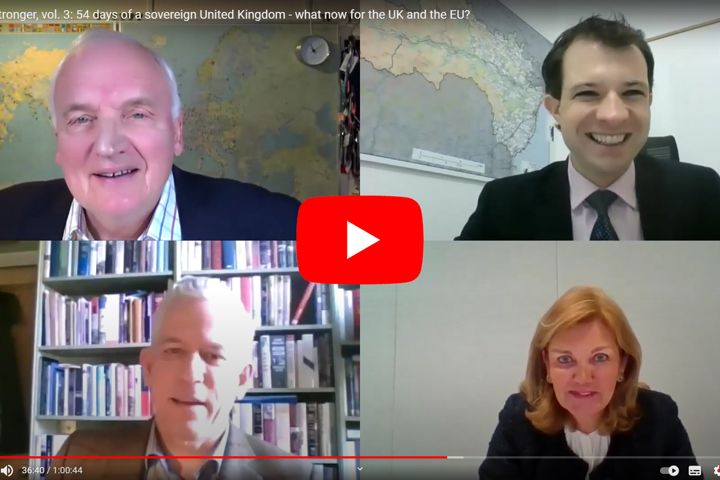 Leading experts and thought leaders from both sides of the North Sea gathered on 23 February to discuss the future for the UK and EU, after UK leaving the Union some two months ago, at the SCC’s third edition of its “Emerging Stronger” event series. Now you can listen in on the conversations and watch the event in its full on Youtube.

What is next for the United Kingdom, and where is it heading? In the aftermath of a hard pandemic-hit and Brexit infused recession, what are we to make of its new relationship to its greatest neighbour, the European Union? This, against a backdrop of a United States in turbulence, and years of distancing itself, and a rising China. How do we emerge stronger?

Featuring Andrew Bowie, MP and Vice Chairman of the Conservative Party, and Chair of the British-Swedish All-Party Parliamentary Group, Charlotte Erkhammar, CEO at Kreab Group and James Sproule, Chief Economist at Handelsbanken plc, the discussions covered everything from the effects we have seen so far of the new relationship, what we can expect from the negotiations going forward, to what impact the calls for Scottish independency can have on society and the UK/EU relationship, and how the UK is to successfully secure its position as a global player outside of the EU.

Said during the discussions

“The UK has left a trading block with a lot of power. But now they can act quicker.” - Charlotte Erkhammar

“The UK government is determined to be a good friend to the EU, we have no interest in seeing chaos…” - James Sproule

"Sweden and Britain have a lot in common driving the green agenda." - Andrew Bowie

The discussions were moderated by Nik Gowing, Director and Founder of Thinking the Unthinkable and former BBC news anchor. The event was kindly sponsored by Handelsbanken plc.

Did you miss the discussions at the third edition of the Emerging Stronger event? Now you can watch the event in its full on Youtube.