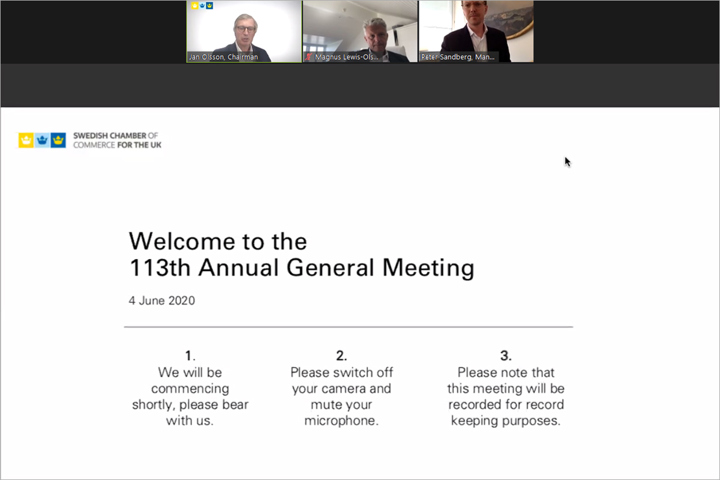 On June 4, the Swedish Chamber of Commerce for the United Kingdom welcomed members to its 113th Annual General Meeting (AGM), hosted for the first time in a virtual setting in light of the ongoing pandemic.

At the meeting, Hélène Barnekow, CEO of Microsoft Sweden, Kristian Elvefors Managing Director at Volvo Car UK and Anders Engstrand, incoming Country Manager UK at SEB were elected to the Council and Board of Directors.

“I am excited about our appointments today. The elected members are all esteemed and engaged business leaders from their respective sectors, and will serve alongside an already impressive list of Swedish-British business profiles. We look forward to working with the three of them within the framework of our ongoing Council work, supporting the Chamber’s strive to develop further in the years ahead”, says Jan Olsson, Chairman of the Swedish Chamber of Commerce.

“Håkan’s contribution to the Chamber over the last decade is extraordinary, including various committee roles, but also as the financial provider of scholarships to the Chamber. A very worthy appointment”, says Jan Olsson, Chairman.

The meeting also served as the official scholarship ceremony for the 2020/21 Swedish Chamber scholarship programme. Four scholarships are provided to talented young students, offering them twelve months’ experience at the Chamber’s secretariat in London. The scholarships have been made available by partnerships with and generous donations from the Gull & Stellan Ljungberg’s Foundation, the Scholarship Fund for Swedish Youth Abroad and the Sten A. Olsson Foundation for Research and Culture. This year’s recipients were:

“The SCC’s scholarship programme dates back many decades, and have a fantastic alumni of successful entrepreneurs and business leaders today. We are very proud of the ongoing partnerships with foundations across Sweden, and love working with incoming new Scholars, developing them, and seeing them develop our organisation too. They are needed now more than ever”, says Peter Sandberg, Managing Director at the Swedish Chamber of Commerce.