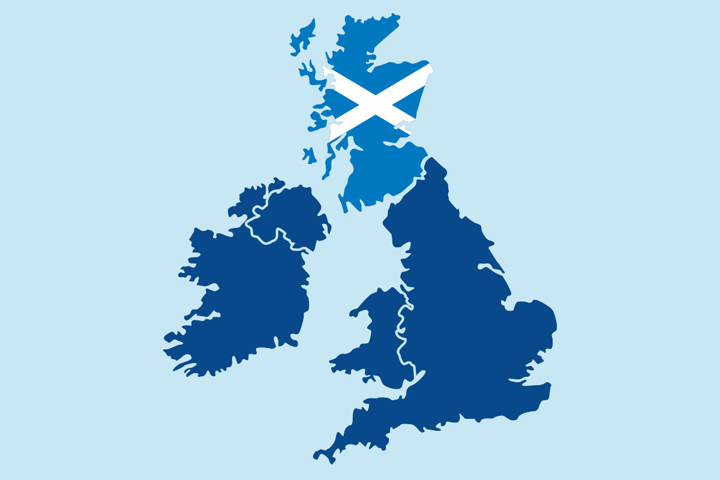 In business with the North

2021 will be the year of many things. For Mike Christopherson, it will be the year of taking on the position as Chapter Chair for the Swedish Chamber of Commerce in Scotland. The Scottish chapter will be the fifth addition to the SCC’s chapters in the UK and will serve as a link to fellow Northern businesses. Mike navigates throughout Edinburgh’s business life as Boda Bar’s owner, a beloved bar around Edinburgh, with an ear to the ground and a finger on the pulse. The Link had a chat with Mike on Scotland as a business region, his journey to Edinburgh and the many similarities between Scotland and Sweden.

What started as a two-week break for Mike Christopherson ended up becoming his home and business hub 16 years later. In general opinion, the UK is known for its pub scene, but Mike identified an opportunity sprung from a disproportionate gender balance. The idea, a coffee shop but like a pub. Edinburgh’s traditional pubs often came across as rough with windows barred up, and if you were a woman and entered, you could be sure of verbal provocation. Making sure that everyone can enjoy a safe and comfortable environment seems like a trivial and given fact, but the first Boda Bar’s opening was met with disbelief. “A small pub came up on the market on Leith walk, similar to what Södermalm in Stockholm used to be a long time ago, sort of a working-class area.” Mike convinced his partner Anna, together with his team to open a Swedish coffee shop with a target to include at least 50% women as their clientele.

Creating something extraordinary
“That was one of the core ideas. People said in the beginning, ‘it won't work’, and it was a bit tough the first two, three weeks, but after that, we had queues outside. Because the demand was there.” As the business took off, Mike reached out to different suppliers to provide him with the best tech in the industry and requested a crash course to get to know the backend of things. If the suppliers wanted to be in on the demand/boom, they had to deliver and provide the best people. Mike’s way of reading the market was an interpretation of his own adolescence. “When I grew up in Stockholm, I was hanging out in coffee shops. That's how we met up with our friends.” Bringing a coffee shop’s relaxed and bohemian ambience towards a place of affectionate banter with friends over a beer or a board game. “ I wanted the Swedish way of doing that and being very conscious about the ambience and the way people talk. It sounds harsh, and we take it for granted now, but it used to be a quite harsh environment at the pubs.” For someone who had never been in the industry, Mike and the Boda Bar team have created something impressive and extraordinary.

A new Scottish chapter
New beginnings often present possibilities just as much as it puts people to the test. The Scottish dialect, with its many variants, proved to be the latter. “We learn sort of a basic English in Sweden or that American English, which can be a bit different. I took an extra job one day a week to get to hear all the various accents. The owner was from Glasgow, so he had quite a heavy accent, but they were so patient with me. I had to repeat the sentence three-four times every time they called from the head office.” Mike’s approach to getting up to speed with so many regional dialects is to become practical straight-away.

The chapter was all about timing. Scotland and business have both been at the forefront of Mike’s mind. “There were no really good connections on the business side between Scotland and Sweden. Most of the businesses are a bit ad hoc, people know people, but nothing really organised. So my goal is to build something stronger and scalable”. After talks with Managing Director, Peter Sandberg at the SCC, the decision was made to join forces. According to Mike, building a more direct and robust relationship between Scotland and Sweden makes sense, as there are a lot of similarities in the mentality. From the hospitality business to something as tangible as forest, to renewable energy and biotech.

Challenge meets opportunity
Mike admits that covid hasn’t been kind to the business but that there are many new opportunities within hospitality and emphasises the importance of adapting quickly as the pandemic’s outcome remains unclear. “We will look into investing in cloud kitchens and different ways to deliver food. Building food brands online from the same kitchen so that we can utilise our kitchen better basically.” Setting up a business provides undisclosed challenges, but with challenges comes opportunity.

Scotland, and specifically Edinburgh, has a robust financial industry. Second, to London, Mikes claims it as underused and refers to it as an underdog with a substantial capacity inhabited by great people. Alongside top universities and research, the medtech sector is growing stronger. “The challenge is the uncertainty around Scottish independence. I think that is definitely the elephant in the room. What would that look like? It creates an ambivalence as there are opportunities here in the quality of life and the access to really quality people with good education level.” And Mike hasn’t even mentioned either whiskey or golf yet, but then again, this chapter has only just started.