Blockchain: As big as the internet

As an oracle of truth, mitigator of fraudulent risks and democratiser of data, blockchain encompasses an incalculable potential to revolutionise business and society in modern times. In truth, a number of experts agree that the technology eventually will be as impactful as the Internet. In this feature Göran Almgren, CEO at Enigio, John Salmon, Technology Partner and Global Head of the Blockchain Practice at Hogan Lovells, and Oliver Oram, Founder and CEO of Chainvine, discuss the fundamental principles and immense opportunities of blockchain technology.

Being one of the most discussed technologies in the contemporary world, blockchain technology is an umbrella concept incorporating a pluralityof definitions, softwares and open source codes. A common denominator, however, is that it is a shared technology or platform based on a distrib-uted ledger. “There is no central authority; it is very much a collaboration between a multitude of players having their own copies of the proof of data or a good,” explains Oliver Oram, Founder and CEO of Chainvine, that specialises in bespoke distributed ledger platforms that create a secure recording of ledger data.

Essentially, the technology is divided into a multitude of nodes that are allocated among partici- pants, thus equally dividing the risk, ownership and power. In essence, a fundamental characteristic of blockchain technology is the concept of transitioning from a centralised to a decentralised power structure. “With blockchain technology, you are moving from a centralised to a decentral- ised world, with transactions that are traditionally processed via trusted third party intermediaries now being conducted on a peer-to-peer basis,” says John Salmon, Technology Partner and Global Head of the Blockchain Practice at Hogan Lovells, a global law firm advising clients on the implementation of blockchain technology.

An oracle of truth
An essential characteristic of blockchain technology is its ability to preserve and verify the authenticity of information. “Enigio’s solutions provide immutable references of truth. With its solutions business data is always stored offchain, whilst the ledger is used to verify the immutability of the data – like an oracle of truth,”says Göran Almgren, CEO at Enigio, a business specialising in creating digital original documents and preservation of digital information. By distributing identical copies of data, a universal truth is shared among multiple users across the world. The fact that everyone simultaneously is being told the same version, makes it hard to lie when participants are being held to account by all the peers. “Blockchain is very much a shared discipline, by enforcing the traceability and democratisation of information in a frictionless manner,” says Oliver.

Blockchain technology has a specific strength in opaque systems with a low level of trust. In that sense, the ability of creating trust is at the core of blockchain technology: “I believe that the principal opportunity entailed by blockchain is the creation of trust in a trustless environment,”says John. By introducing blockchain into these environments, the characteristics of immutability and security strengthen the trust in the system. In the main, it is both expensive and technically dif-ficult to attack all the nodes within a blockchain.“Blockchain really is a lot about cyber security. It is not a silver bullet and there will still be human errors and deliberate human interferences, but with blockchain, disruptions will be more quickly identified,” explains Oliver.

Innovating the financial industry
Characterised by a substantially high risk, an enormous amount of data and a significant need of trust, the financial industry has the potential to particularly benefit from blockchain technology. Instead of relying on a bank as the sole arbiter of truth, every participant of a blockchain has an identical copy of the same record of the database. In the long run, this leads to an increasing resilience in alignment with the independence from central parties and banks that might lose data. However, the symbiotic coexistence between financial institutions and blockchaintechnology is of great importance: “Some people claim that banks and institutions are not needed when there is blockchain, which I do not believe in. Enigio provides solutions that can ensure the survival of these important institutions,” says Göran.

Compliance is growing across business, due to the increasing requirement of anti-money laundering legislation. “Blockchain is very good for financial and foreign currency movements, purely because you have got a lot more trust in the system if you are all on the same ledger,”explains Oliver. Whilst on the one hand blockchain creates trust and can aid financial services inmitigating the risk of fraudulent incidents, there are also concerns around anonymity. “However, following recommendations from the Financial Action Task Force, we have established new anti-money laundering and counterterrorism finance rules that address some of the concerns around anonymity,” says John.

Driving sustainability
Interestingly yet surprisingly enough, the impact of blockchain goes far beyond the technological spectrum. As a matter of fact, blockchain technology is an important force driving sustainable development. According to John, the technology has been proven to aid significantly in pursuit of the UN Sustainable Development Goals. In illustration, blockchain technology can track and ensure that money in charitable causes iscorrectly distributed among beneficiaries. For instance, Chainvine has built a blockchain-based national asset management system aimed at helping a small African country to manage its fishery industry, which accounted for 24% of thenational GDP. Nevertheless, certain autonomous inventions fuelled by blockchain technology- such as Bitcoin and Ethereum- also pose some- what of an environmental challenge. The technologies are set up based on a process called mining, which requires an enormous amount of power. However, the concept of digital original documents leads to a positive climate footprint. Within trade, trade finance and logistics there arestill a large amount of paper documents circulating the globe. First of all, a lower paper consumption saves trees. Second of all, digital documents can be seamlessly sent across the world, thus decreasing the carbon footprint created by global transport. “Sustainability is a key focus since we need to save the planet as well,”says Göran.

Modernising legislation
To a large extent, a multitude of challenges ahead are derived from the fact that today’s systems are extremely antiquated, as well as that the enterprise legal systems that are currently in use were not designed for the global world we live in. “Our instinctual response is to apply existing laws and regulations that were designed for a centralised world in a new decentralised digital environment,”says John. In illustration, the Bills of Exchange Acts – a fundamental law relating to bills of exchange, cheques and promissory notes – was established in 1882, whilst the Swedish equivalent legislation emerged in 1936. “Whenever a new technology surfaces, there is always a question as to whether the current law is suit-able; if the existing legal infrastructure should be adapted to fit the new technology; or if a new regime is needed,”says John. As a matter of fact, the Swedish act is technology-neutral, which British legislators also are seeking to achieve in due course. Göran explains: “The Swedish debt act from 1936 is technology-neutral. The English Bill of Exchange act will need a minor update in order to become technology-neutral, that update is currently being prepared by British legislators.”

In consequence, the European Securities and Markets Authority (ESMA) and the European Banking Authority (EBA), at the request of the European Commission, have assessed to what extent existing European law applies to digitalassets. For instance, one of the identified shortcomings was the lack of a harmonised approach across the EU member states in respect to thequalification of financial instruments. Therefore, the inconsistent application of the rules can potentially lead to regulatory arbitrage.

According to John, the interest in cryptocurrencies and digital assets are particularly popular in the Nordic region and the UK. “The United Kingdom’s innovation-friendly environment lends a hand to it being at the forefront of blockchain technology, especially given its leading reputationin financial technology,” says John. According to Oliver, blockchain technology can advantageously be combined with other innovative technologies, such as the Internet of Things, QR codes, artificial intelligence and machine learning.

In a short-term perspective, the interest in blockchain technology has risen substantially in the wake of the current global pandemic. In the main, the Corona crisis has proven that supply chains often are vulnerable, weak and reliant on people. “As one can see now with COVID-19, supply chains can break down easily because we do not share information properly nor functionally. Blockchain technology has shown an effective way to digitise and strengthen those supply chains,” says Oliver. In a long-term perspective, many experts argue that blockchain technology will be of similar importance as the Internet. Ever since being introduced in the early 1990s, the Internet has grown into an inclusive worldwide service, enabling people across the world to access music, movies and multimedia online. In the future, blockchain technology will arguably obtain a similar magnitude: “Going forward, blockchain will become very much like the Internet. Users all over the world will constantly be connected to a blockchain,” Oliver concludes. 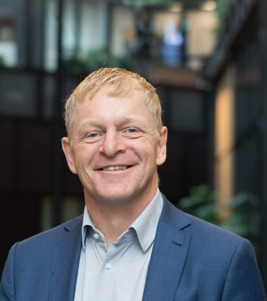